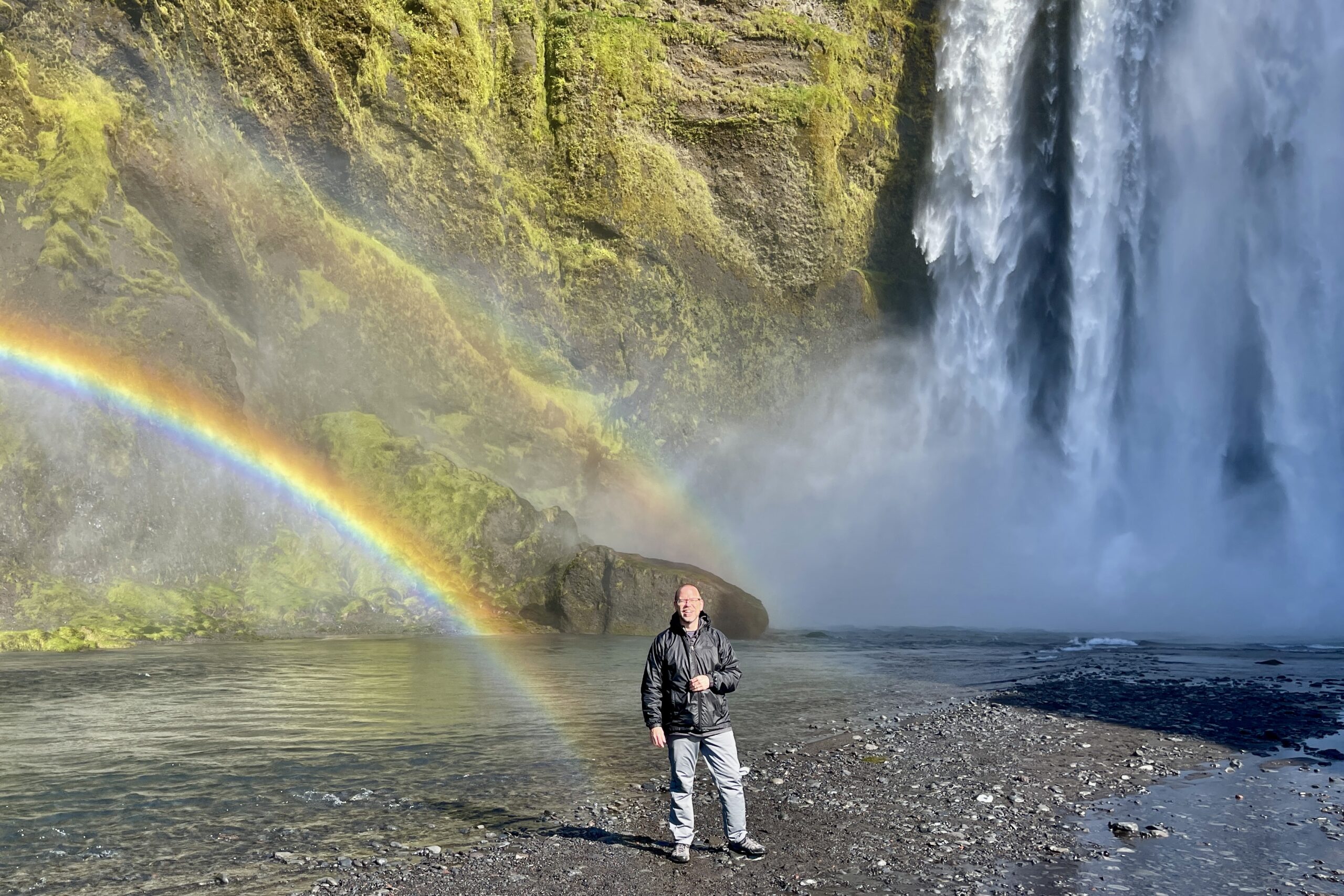 For those who aren’t on Facebook (or friends with me on the platform), or for those who haven’t talked to me recently, you may not know that tomorrow I will return home from Iceland. I spent eight of my ten vacation days, driving around Snaefellsnes Peninsula, the island’s Ring Road, and most of the Golden Circle. Total miles on my campervan’s tires: at least 1,050 on account of me. As for my time in Reykjavik, that may be the topic for another blog entry. For this post, I want to focus on Iceland’s natural wonders.

And what better way than to come up with the clichéd best of list? I will stray from the form because the island is so breathtaking. I couldn’t contain myself to 10 places. Below are 13 sights, along with a description, and why I enjoyed them so much.

Seljalandsfoss:  This 60-meter foss (er, waterfall) filled me with glee. With my water- and windproof shell and shoes covering my body, and water-resistant phone/camera fully charged, I was ready for a good time. And I was going to have a record of it. This wasn’t only up to me. A boisterous group of friends right behind me saw that I wanted a few pictures of me, not just the falls. They encouraged me to exude joy as I was getting sprayed with mist. As you can walk behind this waterfall, they whipped me up for a similarly animated Michael to strike a power pose. I had fun, firstly because of the waterfall but also because I had a cheerleading crew demanding nothing less.

Eastfjords:  The Eastfjords surprised me. If it had been windy, my hands would have been gripped tightly to the wheel with my eyes not straying from the curvy, cliffside roads. But the air was calm. So, I felt in control of my campervan. This allowed my eyes to regularly drift to some fantastic views outside my van’s windows. Roadside pullovers aplenty; I’ll admit I wanted more. Light attaches to a mountainside in many ways when a cloud blankets it. Everything from changing the color to casting a shadow. And this seemed to be happening to every mountain, all the time. And I wanted to record it all. I’d hazard a guess that I got 1/1000 of all the photos I now wanted from a region of the island I expected would feel tedious or dangerous depending on the weather.

Gljúfrabui:  Queue up the joy of a waterfall. And this one is just a short walk from Seljalandfoss. But this one you had to work for more. Not only did you have to maneuver your footing on loose rocks into a cave, but you also had to do it while trying not to fall into the stream the waterfall pouring into a cave created. Thus far into the trip, my waterproof hiking shoes were doing their job. But they can’t help when a person ahead of you falls back and forces you to do the same. Splash! Oh well, this loosened the restrictions for the continued trek into the cave. Once in and being doused with heavy mist, I turned on the energy from the last waterfall to get some more gleeful pics of myself. What fun!

Skógafoss: Yeah, Skógafoss is another impressive waterfall. That being the case, this one wouldn’t have made it into the top 10 if it hadn’t been for the double rainbow. You know, I was literally at the foot of the double rainbow. I mean, look at that picture. I should have been standing in one or two pots of gold. “You know what, Skógafoss? Get this out of the #4 spot! Why aren’t I a zillionaire right now?

Hverfjall:  I categorized Hverfjall as a must-see before my trip. While I can’t say that anything tops Haleakalā on Hawaii’s island of Maui, that one made me a major fan of craters. However, where Haleakalā has many hues on its surface, Hverfjall is one color: uniform brown. Another point of interest to me is that rather than it being solid rock or densely packed sand and small stones, Hverfjall’s surface is loose. Heavy winds blow up fine sand particles. How is this crater — a colossal heap of sand — still in one place 2,800 – 2,900 years after it blew its top?

Fjadrargljufur Canyon: Waterfall, stream, and canyon: Oh my! It is magnificent and oh so peaceful. That’s it. You must visit it. Now!

Vestrahorn: Ahhhh, Vestrahorn, you could have been a tick or two higher on this list if only a wave or high tide had come in. My photo could have shown the mountain reflected in the water below. Oh well, this multi-colored attraction is beautiful in its own right. Don’t cha think?

Diamond Beach: Okay, I feel guilty listing Diamond Beach and Jökulsárlón lagoon on this list. They are both the product of glaciers melting and partially the consequence of climate change. Not completely. Some melting would happen in the warmer months, but winter snows would replenish. But I noted climate change: Iceland lost around 290 square miles — or seven percent — of the glacier surface between 2000 and 2019. That’s beyond sad, as glaciers are an astonishing thing to see. As I saw my first one while driving on day five of my travels, I was overcome — lump in the back of my throat, perhaps even a tear. Okay, soapbox aside, Diamond Beach is a sight to behold. They are beautiful. Ice chunks can be clear, white, blue, or black (from sand, dirt, and ash). It feels mystical. And then, to see the ice float ashore is pretty amazing.

Hverir: Hverir is ugly. It reeks. Its sulfur mud pots are what vomitous gates to hell must smell and look like — if I believed in hell, that is. And its steam vents, while interesting sights, are also pretty unattractive. So why is this even on the list? I am drawn to the fact that our planet is so diverse, and this is part of that diversity. Do other places like this exist on Earth? I’m not aware of any. No matter, it’s not a run-of-the-mill place. And so, I was amazed.

Goðafoss: The horseshoe shape of this enormous waterfall makes it look like it is many converging waterfalls. It is a sight to behold in its own right. But I must admit, this waterfall makes it into the top 10 because of my travel partners (and the creative tourist who took many shots of us).

Jökulsárlón: If you jumped to this list segment, read the first half of Diamond Beach’s soapbox. Noted? Okay. Now, where Diamond Beach gets its beauty in smaller chunks of ice and the art-like ice that makes it ashore, Jökulsárlón gets its beauty in its impressive grandeur. Not only do you see huge multi-colored bricks of ice floating in a lagoon, you see the glacier slowly flow its way down.

Djúpalónssandur beach: The beach’s lava formations enthralled me, relaxed me by walking on the black sand beach, and made me happy with the small number of tourists I encountered here. For these reasons, Djúpalónssandur beach surpassed Reyinsfjara and Reynisdrangar (both great but too much of a touristy spectacle attached to them).

Svartifoss: A significant sight in Reykjavik, Iceland, is Hallgrímskirkja Church, which draws upon the natural artistry of Svartifoss and its basalt columns. Honestly, I can’t pinpoint why I liked this sight and the trek to get there so much. It might be something about the mist bouncing off the pool below that, for me, is refreshing as with most any waterfall. I did stay there longer than most of the tourist crew I walked in with. I literally wanted to soak the sight in.

What would have required too much time to get to? Dettifoss, I’m sorry. I just don’t know that even the most powerful waterfall in Europe is worth the two to two hour, thirty minutes round trip transit time, to say nothing about the time to soak in the sight. I was banking time for the South Coast. Besides, your water seems dirty and not photogenic based on the pictures and videos I’ve watched.

Too expensive? Perhaps:  Scuba diving at Silfra (where two tectonic plates meet and are covered with clear blue water. Maybe you are worth a couple of hundred dollars. But add in the time you’d gulp up — getting there, suiting up, learning how to scuba, and such — I’m not sure I could justify it on this trip.

It was okay. But I saw better at Djúpalónssandur beach:  Reyinsfjara and Reynisdrangar make an excellent sight-combo, but as I noted earlier, they have a little bit too much touristy spectacle attached to them.

I saw it; I wasn’t impressed:  Kirkjufell mountain and waterfall. Sorry, Game of Thrones fans.

For those who aren’t on Facebook (or friends with me on the platform), or for […]